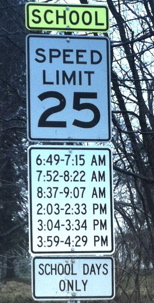 This was all over the news around here about a week ago.

I'd love to meet the people that approved this sign. And although they have "fixed" it after all the attention, it still is a little extreme.
The following article is from the Oakland County Daily Tribune...

Two signs that listed six separate daily times during which drivers were to slow to 25 mph near schools in White Lake have been replaced.Greg Smith, a resident who complained about the sign, said the sign on Bogie Lake Road now lists two times for drivers to slow — between 6:49-9:07 a.m. and between 2:03-4:29 p.m.“I’m relieved,” he said.Smith complained that the old sign, which was erected Jan. 12, was so complicated, he was considering posting a list of times on his dashboard.The old signs instructed drivers to slow down to 25 mph between 6:49-7:15, 7:52-8:22 and 8:37-9:07 mornings and 2:03-2:33, 3:04-3:34 and 3:59-4:29 afternoons. The rest of the road is posted as 45 mph.There are three schools along that stretch of road are Lakeland High, White Lake Middle and Lakewood Elementary schools.Road Commission for Oakland County crews replaced the sign as an “interim step,” said Craig Bryson, spokesman.“We're hoping the school district will agree to help fund the flashing lights as the preferred solution,” he said. Two flashing lights would cost upwards of $50,000.Smith, who lives near the schools and regularly travels Bogie Lake, said because the three schools are “bunched together,” traffic is “pretty crazy in the mornings and evenings with parents picking up kids.”

Email ThisBlogThis!Share to TwitterShare to FacebookShare to Pinterest
Labels: Brighter Days, Ripped from the headlines

Over here we have temporary speed restriction signs that light up when they're needed.

The signs say 'Speed limit 25 when lights flash' then the schools switch on the lights when they're needed. They're amber/orange lights that flash on and off in pairs. You can't mistake them.

The fun starts when they forget to switch them off again, of course!

In my own town, we have those lights too. However they are on timers because no one can be responsible enough to turn them on and off.

This would be hilarious if it weren't so completely idiotic. Can you imagine that more than one person was actually involved in that decision and then spent the money to have that sign produced?!? Yikes!

Looks like some 'civil servant' ran amok' with this as'sign'ment!

And TEXTING is supposed to be dangerous. What about SIGNAGE?? This signage would be more distracting than texting while driving!

Just put up the dang blinking lights during "school hours" and forget the confusion.