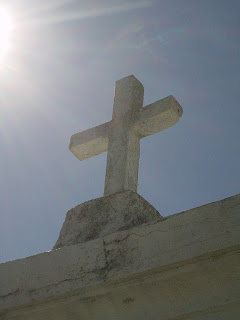 A fellow blogger recently blogged about the symbol of the cross: A symbol of Love, or Hate? He brings up a good question. Christians are raised to see this symbol as something that represents their faith in God and the love that He has for all of us. The horizontal pieces can represent Jesus' arms stretched out, welcoming us. Why then, does this symbol represent so many mixed feelings for much of the population. I'm sure that I am not alone when I state that I have been rejected by the same people that preach this love and acceptance that the cross represents. According to the Bible, Jesus died so that we would not have to suffer. But to many of us, the church represents love and acceptance... if you change and see things our way. 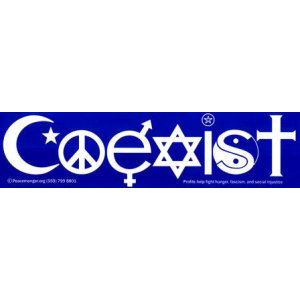 I proudly display an emblem on my personal car. It is much like all the bumper stickers that you see all over the road. It reads COEXIST. The word is spelled out using religious symbols instead of letters and looks like this.

The idea is that we all need to live and let live. That we can all exist in this world without killing each other. No matter who you worship or what you call it, we are all humans and deserve the love and respect of other humans.

You can see here the explanation of each letter and what it stands for.


The Christians seem to be in an uproar about this whole thing and it is my belief that it is because the cross comes last and Islam comes first.

Now, I have seen several versions of this. Some replace the Male/Female with and e=mc2 which represents science. And some offer the ying-yang sign as the O and put the Peace sign dotting the I. All of them have three things the same. The CX & T always represent those three religions and always in that order.

Because those three seem to be the ones that need reminding of the whole idea the most and ....... That's how you spell COEXIST. Which is an excellent word to use for the "movement".

I was called the other day by a friend who was driving behind me and saw the emblem on my car. He was outraged by the fact that I would have that on my vehicle. Proclaiming that the Islamic people want to kill me and we should not even allow them in our country at all. He went on and on proving how much of a moron he is and that's when I realized that he is a youth minister at a local church!

For your entertainment and to be fair, I am now including a section of dialog from another website that proclaims the COEXIST movement as an abandonment of core absolute values.


The goal of this movement is the promotion of a pluralistic and universal utopian worldview. At the heart of this movement is the abandonment of core absolutes and values (moral and spiritual.) This movement seeks to undermine personal beliefs and practices for the supposed “betterment” of world unification. Its most damnable feature, however, is the staunch rejection of the sovereignty and reality of Almighty God, His authoritative Word (the Bible), and His Savior to all fallen men, the Lord Jesus Christ (John 14:6; Acts 4:12; 1 John 2:22-23). The chief Promoter of this godless ecumenical movement is the godless music industry and the pop icon Bono from the band U2. Hollywood and the fashion industry also promote this movement with an array of clothing products, gear and bumper stickers.
A phrase from the Coexist website states, “Coexist is a concept brand for everyone, connecting people and planet, together we symbolize life, love and global harmony.”
The Coexist phenomenon is the product of the subjective secular Left. The majority of the Coexist followers are secular liberals. This ideology of religious pluralism actually intersects with all three political ideologies (liberal, moderate, and conservative), but it has its greatest hold in the secular liberal mind (Romans 1:18-32; 8:5-8). 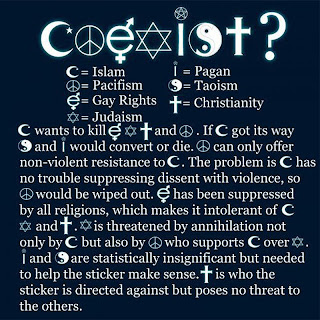 The true core of the Left are secularists who wish to promote a delusional, pluralistic universe that combines all godless ideologies.
"However, their main goal and real agenda is to rid the world of all religious ideologies in favor of a secular, godless one".
Though at first glance the motivation behind this movement seems sincere, noble and virtuous, the very subtle hiss of Luciferian (Satanic) mass deception can be distinctly heard. This movement seeks to bring about a godless unification - while rejecting sound moral absolutes - of the scattered inhabitants of nations following the Tower of Babel rebellion ~4,300 years ago (Gen. 11:1-9; Dan. 2:31-35, 37-45; Rev. 13:12-14).

It goes on and on. Anyone wishing to read more can visit the site. http://www.freerepublic.com/focus/news/2696653/posts

While I was researching this more, I found this version. What can be said about it that it doesn't already say?

As you all know, I visit many different kinds of churches almost daily. Each and every visit is for one reason. Someone has died. Someone's Mother/Father/Daughter/Son/Sister or Brother. When you are faced with death every day, you tend to see life a little differently. I am there to help the living cope with the loss of a loved one. It makes no difference to me what anyone believes about the Here After. We are all here for just a short while. And we should make the most of what we are given. If we get a hundred seconds or a hundred years, we touch the lives around us in so many ways. If you truly want to leave the world a better place for your children, then perhaps we should all start getting along a little better. And start COEXISTing. 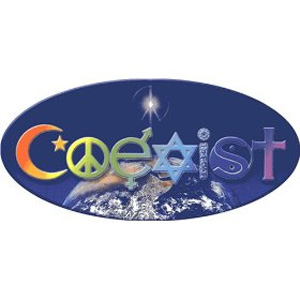 If you've stuck with me through this rant, Thank You! and I'd love to read your opinions.
Feel free to comment on other peoples comments as well.
And EVERYONE'S opinions are welcome, because that's how we are here on the
Brighter Side.

Email ThisBlogThis!Share to TwitterShare to FacebookShare to Pinterest
Labels: In my Opinion, Observations from the driver's seat

Oh Stew you can raise some interesting topics!

As an 'i' I feel persecuted by several of the letters on your sticker - and yet all I want is to be allowed to COEXIST.

Others claim they do. They preach 'O' but only as long as I agree with them. As soon as I tell them my religion I get a distinct feeling that I'm not welome any more.

Where can I get a COEXIST sticker? I'd like one.

You are always welcome here at the brighter side. I quite enjoy varying opinions.
I got my emblem at a novelty store in Saugatuck, Michigan. I'd never seen one before.
www.stickershoppe.com/mm5/merchant.mvc?
Sells a variety of stickers and decals.

I really enjoyed reading this. It stirred up a lot of emotion and got me thinking a lot (and talking with Ray) about religion.

Looking at that sticker through your eyes gives it a whole new meaning for me. I love your lighthearted approach to the issue. If more people reacted to religion the way you do the world would be capable of being peaceful.

I've always enjoyed our in depth conversations. You bring up so many valid, interesting points. This makes me miss you even more. :-)

If only this the direction in which the world is going! How good that would be. We have to have HOPE and live accordingly by setting an example right in our own backyards.
I am not a 'religious' person but I respect the right of those who are. We are all finding our way in this life and we will all do it differently based on our experiences and influences.
I do find it difficult at times to listen to certain news items that come out from the organized religions about how we all should be living.....and that their way is the one and only way.

Keep on setting that example, Jim. We need more people like you in the world.

I do love to inspire thought.

The people getting rankled by the coexist sticker are likely the same ones with a bunker full of rations and guns because they're scared somebody is going to take their religion and freedom away. I'm getting so tired of all the fear-driven rhetoric in politics lately. People seem willing to believe anything negative about government, corporations, etc. and can't accept anything positive, even if it is the simple and obvious truth. I wholeheartedly believe anyone fitting that bill should be required to wear a tinfoil hat when in public :-)

It's not difficult to believe that a good sales pitch from their pastor would have them all wearing the tin foil hats in an instant.