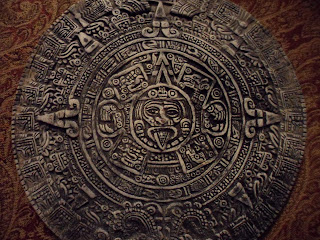 Is it the end of the world?
Or just the world as we know it?
The Maya left us a calendar that ends on December 21st of this year.
We are fast approaching this fateful day. This leaves us wondering. Are the planets going to align and cause the Earth's axis to shift and the polar ice caps to melt causing floods everywhere? Will there be earthquakes felt around the globe? Is there going to be the long awaited rapture foretold in the book of Revelations? How will the world change? What fate awaits us?

One thing I know for sure, is that life as I know it will surely end on the 21st of December of 2012.
Last year at this time, we were moving my father into my sister's new house. A rather large house with room for anything and everything that our family could throw at it. With ground floor rooms for both my sister and father and still more rooms upstairs for anyone else, it's been a good house to call home to our large family gatherings.

Followers that have been with me throughout the year will remember that my sister suffered a brain aneurysm  at the end of March. It was a tough couple of months in the hospital for her and the rest of us had to step up and take care of my 88 year old father a little more. When my sister came back home, the work multiplied to taking care of both of them. Some of the doctors claim that her brain damage is irreversible. Weather she recovers or not, one thing is clear, disability insurance doesn't pay the same as her full time job at the local theater where she booked the acts that perform there. So it's no wonder that money has been tight since that fateful day when she called me to take her to the doctor for a headache and I ended up in the Emergency Room making life and death decisions and ultimately placing her in a coma for transfer to another hospital where they could help her with her head trauma.

We love the large beautiful home, but it has proved to be too much for us to handle without her income. So on November 18th (exactly one year to the day after purchasing the home) we placed the house up for sale.
A half hour after the open house started, we accepted the an offer from the second couple that saw the house, for full asking price (including closing cost!).

For the open house, I had strung pine garland through the railing of the switch-back stairs and loft area as well as the bridge that leads to the upstairs bedrooms. I then wrapped all the paintings in the home with christmas paper in shades of red. I then baked some cinnamon  rolls and filled the home with the warm scent of the holidays. These buyers were putty in my hands. They didn't stand a chance against my theme of "Home for the Holidays".

It turns out, they want to be in the house for Christmas! We will be signing over the home and handing over the keys on the 21st of December 2012, essentially changing life as we know it for good. And changing the lives of this young couple as they start their new family in a new home.

We unfortunately had not secured a new home yet, as we were not expecting the house to sell in a half hour.
I like to always stay positive and try to always see something before it happens. I find this really works to visualize what you want and leave the details to God or the universe.

Staying positive and always expecting the best outcome worked for selling the house. And now we are doing the same for finding a new one. And after spending the day looking at new construction condos in the area, I think we may have found our new home for Dad and Sis. It has everything that we were looking for and more for a price that works great for the current budget. Going with a new condo will take a lot of pressure off of me when it comes to maintenance and even lawn care. And I will be able to concentrate on caring for the two of them better. Monday we will talk numbers with the finance people and hopefully start moving within the week.

So again I will apologize for not posting very much lately. As you can see, when combined with running the ever growing business and working part-time at a funeral home, sitting down at the computer just doesn't always happen. So I'm hoping that the 21st of December will be the start of something wonderful. So I can get back to telling you folks all about the goofy things that happen on the way to the cemetery.
Posted by Unknown at 8:23 AM

Email ThisBlogThis!Share to TwitterShare to FacebookShare to Pinterest
Labels: everyday life, My Life

Stew, you are amazing. You take whatever life hurls at you and you just absorb it. I admire that. I'd be going round the bend by now, and probably dragging others with me!

I really hope all's well and that the new house is everything you hope it will be. I'm sure someone who can work magic with pine garland and cinnamon rolls can do anything!

Much love and hugs.

It sounds like things are working out well for you and your family. That's as it should be in the scheme of things. I'm looking forward to more posts about how everyone settles into the new life.

Whew! I'm exhausted just reading this! Life has that knack of changing 'on a dime', doesn't it? How smart of you to help the selling process along the way you did, Stew.
Your Dad and Sis are very fortunate to have you there for them, as I'm sure they know.