One More For The Road

With a promise of warmer weather, I have mixed feelings.

My business is based on making the funeral homes where I work look good. So it is my responsibility to make sure that every family has a clean funeral coach (hearse) to carry their loved one to the grave. While this sub-zero weather that we've had all during the month of February has been brutal and difficult to cope with at times, at least everything is frozen solid and I can deliver a clean coach to the site of the funeral, provided I can wash it and not have it freeze solid. Now, as the temperatures rise, the snow and ice begin to melt. This causes puddles along the roadways that are a mix of dirty slush and salt. When splashed upon my shiny black coaches makes for a disgusting mess unfit for even the foulest of villain's funerals, let alone a dearly loved mother of four. 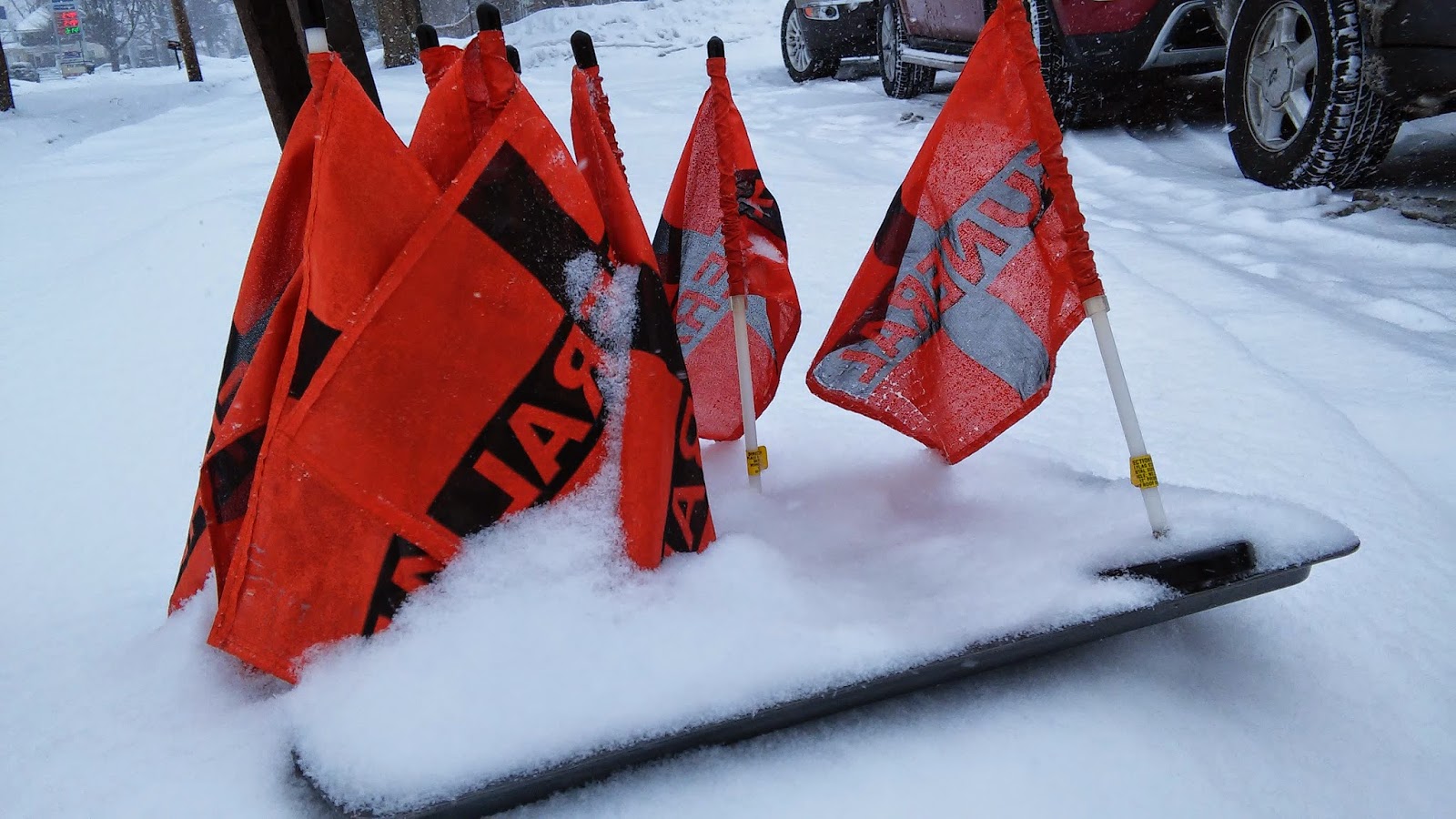 That said, the weather report was calling for a warm up. We were to actually see temperatures above the freezing mark for the first time in over a month. Spring is just around the corner they say. But it's difficult to hear when there is a frozen, foot deep crust of snow and ice on everything in sight. The report said that by the evening drive home, temperature would be in the 30's f. But first! Snow! Yes, another 4 inches of snow.

It started snowing about the same time that we pulled the coach out of the garage. Just the day before I had cleaned the Black Pearl, as we call it, and I was proud to send it to service another grieving family. By the time we reached the funeral home 15 miles away, all you could see was white. The farm fields gave way to the sky and the whole thing disguised the road with it's white cloak. We watched as nature buried us deeper and deeper. By the time the service was over and we processed to the cemetery, the snow had changed to freezing rain, coating all that white with a slick gloss. We turned into the cemetery following the director in his van. Twenty SUV's and trucks trailing behind. As the terrain rolled first down and then up, I noticed that the directors van was sliding sideways down the hill into the snow bank. With multiple vehicles still blocking the busy road behind us and nowhere to turn, myself and several family members quickly came to the rescue pushing his van out of the way.

The coach made it up the hill just fine and we placed bets on each vehicle as it rounded the curve and approached the hill. All in all, there were five that got stuck. Many people trudged through the cemetery on foot after leaving their stuck vehicle. Finally, we gathered around the grave and carried the man to his final resting place.

After prayers had been said and flowers placed on the casket as a farewell, we began the process of getting everyone back on the road and headed to the luncheon that had been prepared. Last was the director, still stuck at the back of the cemetery, down the hill. It was a long push up the hill, but we got him to safety. Keep in mind when painting this picture in your head, that the entire time, we are wearing nice black suites and overcoats.

By the next morning, it had been above freezing for most of the night and almost all of yesterdays snow had disappeared. With the Great Melt of 2015 at hand, the roads are a sloppy mess and the rivers are filling to capacity fast. Now I just need to figure out how to get the Black Pearl cleaned for the next service.
Posted by Unknown at 11:30 PM

Email ThisBlogThis!Share to TwitterShare to FacebookShare to Pinterest
Labels: My Life, On the way to the Cemetery

What a nightmare this winter has been, Stew! I am sure most people would understand and appreciate your hard work in keeping up appearances in your industry.

yikes!!
so much snow!! then snow to rain! yeah, what a dirty slushy mess.
i can see how the procession would be a little 'cleaner' through the snow...rather than slushy stuff.
what a heart thumping experience...getting to the cemetery safe & sound in the winter weather.

as for your Black Pearl...i'm sure your clients would understand if the roads get all mushy & slushy & Pearl arrives not in a pristine shape. it would bother you, way more than anyone else. :)
have a great weekend Stew!!