Before you read this article, How kewl is it that they got married in a cemetery? 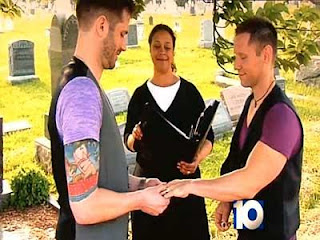 When Stephen Hill and Joshua Snyder went to the courthouse to officially hyphenate their last names together, they ended up pulled aside in a room with the magistrate.

The Columbus, Ohio, couple were celebrating their one-year anniversary after having been married in Washington, D.C.

Snyder says "it was kind of humiliating" to expect a name change would be no big deal and have it turn out so differently. "They basically told us to lie. They didn't use the word 'lie,' but they basically said if you use the word 'marriage,' it will get denied."

But Hill refused to lie any longer, having served in the military for two decades under the "don't ask, don't tell" policy. And so the couple filed their request to change their last names with marriage clearly labeled as their reason.

A news report about the couple's request for a name change added to the anticipation for today's hearing. A judge heard their request today but opted not to issue a decision, instead promising to mail it to them. Changing a last name in Ohio would require a 10-page application, printing their names in the newspaper, $138 each, and then an appearance before the judge who normally renders a verdict on whether to let the name change go forward.

Some might remember Hill as the soldier booed by an audience during a Republican presidential debate for asking whether the candidates would try to reinstate "don't ask, don't tell." And he and his husband are also part of a lawsuit from the Servicemembers Legal Defense Network that is seeking to get the Defense of Marriage Act ruled unconstitutional.
Watch the news report on the couple and their request.

We've never given much thought to changing our names. We'll both answer to either. Our marriage was to tell each other that we are committed to each other for a life time. We don't need anyone else to justify that.
But I would hope that if we decided to make that sort of public commitment, that we would be allowed by the law.
Posted by Unknown at 5:41 PM

Email ThisBlogThis!Share to TwitterShare to FacebookShare to Pinterest
Labels: In my Opinion, Ripped from the headlines

an interesting read.... it's easy enough in the UK to change your name.....I think that If chris and I got spliced that we would share our surnames

It seems to me that as long as the name change is not for illegal purposes there shouldn't be a problem. Personally, I wouldn't want to change my name because of marriage, but that's just me.

There are many women lately that would agree with you Ms Sparrow.
My niece hyphenated her name last month when she got married. Just a personal preference, I guess.
But to be told that you can't, seems a little wrong.