Fist in the Air 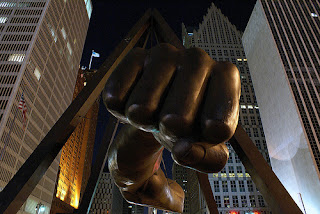 There is no doubt, Joe Louis "The Brown Bomber" was an amazing athlete.

As a professional boxer, he defeated Max Schmeling in a boxing match, shattering the myth of racial superiority back when the Nazi's were gaining speed in Germany. He served America in the segregated army of World War II and fought for the rights of Afro Americans to participate in professional sports. He did this with his fist and determination.

As a Detroit native, it is only fitting that one of Detroit's sporting venues is named after him. The Detroit Red Wings play at Joe Louis Arena. Standing proudly at the foot of the first paved road in the world (Woodward Avenue) you can find this statue. A 24 foot long bronze arm and fist representing Joe's fist, suspended in the middle of the busiest intersection in the city. It's an amazing sculpture and a nice tribute. For those who know who Joe Louis was, it's great. How does this reflect on a city that does not have such a good image for those that might be visiting though? Imagine that you are visiting the city for the first time and you know nothing of a boxer from the WW2 era. You just see a giant fist, in the heart of the city. Is Detroit really that tough of a town? And look out Canada, this thing is pointed right at you.

This is what we are teaching our children. This is a tough town and you better be ready. Or get out of the way. This is what Laura commented about my previous post Will it get Better
i've been thinking of your 'bully' posts...and with all the 'bully' attention on tv lately. i wanted to come back and add a few words to what i said...
i think that in the workplace...bullying shouldn't be tolerated. i know i said in another comment that firing them wouldn't change them...but maybe if they find themselves out of work...over and over again...they MIGHT start to THINK about their actions.
as far as bully kids...no, they shouldn't be tolerated either...and if other kids step in and stick up for those that are being bullied...it c an only help.
kid bullies have to be learning this behavior from somewhere...they're not born a bully...are they? are they bullied at home? do their parents bully other people?
i don't know. standing up to a bully wherever possible...i guess is the first step...

I thought it deserved revisiting as well.


Looking back at my own childhood, I was worthy of being picked on or bullied. I was quite different. The thing that got me through was the fact that I was able to befriend the right people. When I got bullied, and it was often, there would always be someone there to defend me. Someone would stand up and say " Knock it off, leave him alone". If I were to run into anyone from my childhood today, I would want it to be one of those people that stood up for me. I would thank them for standing up to those bullies for a kid that couldn't do it. It surprised me when my friend killed himself because I always looked up to him. I thought he was the strong one. But perhaps he wasn't as strong as I thought and maybe he needed someone to stand up for him. I wish that I could have done that.

As for workplace bullying, I find it funny that the district manager that I wrote of before, just issued a memo to all employees that anyone caught bullying or harassing anyone else would be terminated immediately. Why is it that she doesn't see herself as a bully?

And if I were mayor of Detroit, I would move that fist sculpture to in front of Joe Louis Arena where it would make more sense. It seems that everything in there is about hockey and the Red Wings. Joe Louis was a fighter. Maybe that's why we have so many fights in hockey games.

But as with my own childhood, we need to teach the good kids to stand up for those that are being bullied. We need to lead by example and "don't perpetuate the hate". Every little bit helps.

I wont stand for bullying, and have seen it in the workplace fairly recently
someone tried to bully me and was put in their place with a loud ( and loud enough to humiliate) retort

I'm not sure where I stand on the question of 'the fist'. I think art is meant to be a talking point and I don't think that a fist necessarily means aggression (It can mean survival, determination, success). I guess if you're going to commemorate a fighter, fists are involved. Perhaps if it was wearing a boxing glove it would be better?

...it doesn't really surprise me about your district manager. people don't always see themselves for who they really are. for example...i live in FL, but am originally from NY...around the city...my dad raised me to not see or judge people by 'color'. well, here i am now...in the south. i have run into more people than i wish to count...who are so closed minded, prejudiced...BUT they don't see that! they say "who me? i'm not racist. i have...uh...black friends", then in the next breath they say, nigg...FORGET IT! that word can't come out my mouth. even repeating what someone said.

my point?? some people just don't SEE. or maybe they just think they're better than everyone else?
OH yeah...that's got to be what a bully thinks anyway...right?!

i'm rambling...
bullies have a warped sense of who they are. they have to control. they have to degrade others. they have to cause pain.
i feel sorry for the 'partner' of a bully...it will no doubt be an abusive relationship.

BUT i do think that MOST bullies were made this way by learning this behavior from someone in their life. most probably...abusive parents. they are acting out. whether it's mental or physical abuse...that's what they're doing. they're abusing others.

((if someone can't stand up to being bullied...then others have to step up and show the bully that they just can't continue! it will not be tolerated.))

I too, thought that maybe a boxing glove would be appropriate.

I think Laura makes a very valid point here that bullies really do think they are better than everyone else. and that is a good representation of the city. They are out to prove that they are better. There is a huge segregation of people in the Detroit area. All breeds seem to ghettoise themselves and don't take well to others moving in. It's not just a black thing either. And each type of people think that they are better. That's why I love Toronto so much. The areas that I've seen are so mixed and there is so much less anomocity.