Lions and Tigers and Bears and Deer too!

Last night was a long one. I started out driving at 2:30 pm. I picked up the limousine and headed to the funeral home to pick up the owner and a few of his friends. Our local sports teams are doing quite well lately and they got their hands on some Monday night football tickets to see the Detroit Lions take on the Chicago Bears. They started their night out catching the Detroit Tiger's game on a big screen at a local bar in Detroit. So they really did see Lions and Tiger and Bears!
Oh My!

For the sports enthusiast, the Tigers lost and the Lions won.

By the time I was heading home, it was 2:30am. Of course it was dark and because of our unseasonably warm October days, it was foggy as the night chill set in. As I drove along with the fog lights illuminating the pavement in front of my car and the headlights off, I'd catch the occasional glimpse of a dear or other animal along the side of the road, grazing on the long grass in the ditches. You could see the eyes of the animals reflecting the lights back at me. This made me think first that evolution has really helped us to be able to see them as we drive and avoid the hazards of them wondering out in to the road.
But then I thought, I'm sure that their eyes did this before there were cars. And I started to think about what actually makes their eyes do that. You can see it in almost all animals.
Then I remembered back to the morning before as I made my way home from my other night job and the children were walking to school in the fog. Their eyes don't glow!
Why do you suppose that we humans don't have the same thing in our eyes that make them glow in the dark as our mammal counterparts. 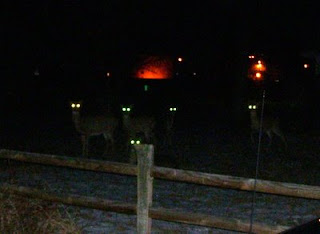 Wow, good point! Wonder why our eyes don't glow like animals do. Hmmmm. I never thought about it until you mentioned it. Hmmmm. Me thinks it is something I am going to have to find out.
I used to watch Proffesional football, but not anymore. The politics and the salaries those players make for just playing a game got under my skin. I'll take college football anyday over Proffesional.
Oh, love the pic of the deer! Way cool.
xo

Maybe because we don't usually go out looking for food in the middle of the night when we need to be protected against the elements? That is a good question, Stew.

Saw a bit of the Lions game last night; glad to see they are playing really well and are 5-0; always like a winning team like that (though I like the Chargers thare are 4-1 so far this year)

Excellent question. They can all see better in the dark than we can too.

(Long story about how our eyes have moved forwards so we have stereo vision and we can see better what our hands are doing. But we lost night vision in the process. I did human evolution as part of my Uni degree - my lecturer was an expert in how and why the human brain/hand/eye system developed.)

I love the photo of the deer.

It's really kind of a freak thing, the lions starting out so well. It's been a long time since they actually played well. We're so used to them losing that you can't help but to get a little excited for them.