Our forth stop on our Caribbean adventure brought us to Cozumel, Mexico. It's a small island off the coast of the Yukatan Peninsula. Last year, when we took our parents on a cruise, this was the only stop on the short cruise. Ed and I got off the ship back then and did a wonderful shore excursion. But we were quite unimpressed with the island as a whole, from what we had seen. 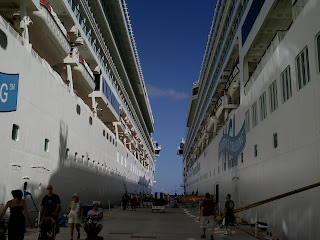 So we opted to not book anything for this leg of our trip. Instead we decided to prove to ourselves that Cozumel was a nice place to visit.

We disembarked the ship with no destination in mind. We had been invited to the group gathering at Senor Frogs, later in the day. But other than that we were off on an adventure to discover what this island had to offer. 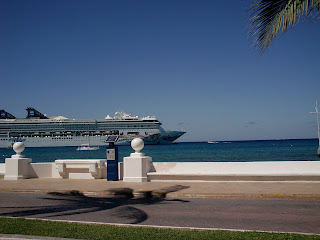 We stayed right in town and decided it was not a good idea to try and drive in a place that was foreign to us. So we found ourselves wandering around the streets discovering whatever we could. 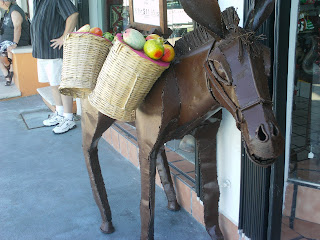 The shops near the ship had people positioned outside, begging us to come in and see their shop. Promising us that we didn't have to buy anything, just come in and look.

So we agreed that the first shop that didn't beg us to come in would be the one that we would go in.

Other than this donkey out front, no one begged us at this shop and this is where I found that kewl wooden jar that I showed you a couple of post ago. 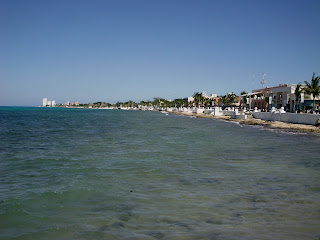 The shore line of this town was so beautiful. And because of being an island, thirty miles off the coast, we felt more comfortable walking around freely than if we had visited someplace like Cancun on the main land. The crime and violence in Mexico is out of hand lately. And we had to be safe. 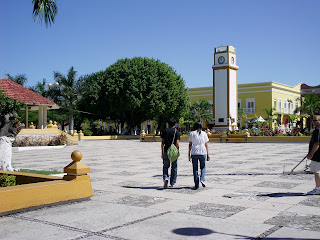 We found this town square and were able to catch our breath and relax for a bit. 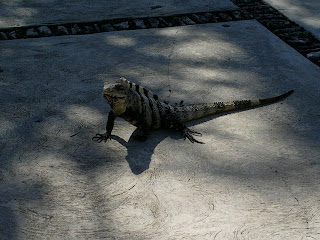 That's when we were approached by this fellow looking for a hand out. I don't quite know what to give an iguana though and he didn't speak English. So he went away empty clawed. 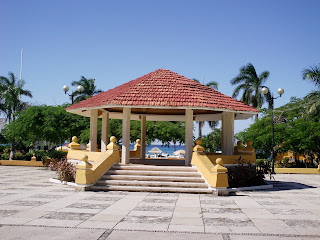 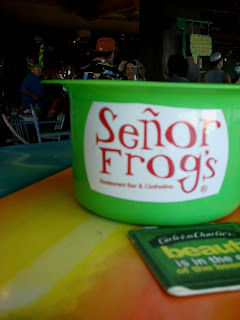 at Senor Frogs. We had arranged earlier for a private party there that was open bar for one admission price. I thought the price was steep and decided that I was going to get my moneys worth.

I'm not much of a drinker and tequila is not my thing at all. So the rest of the day is a bit of a blur. 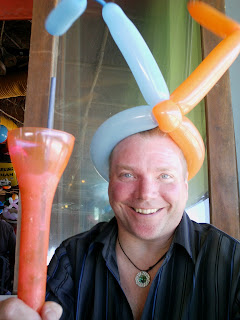 We got ourselves a table by the open window and enjoyed the view outside as much as the party going on inside.

They came over and made balloon hats for us and gave us a "yard" to drink from.

Then they came around with shots of tequila just in case we weren't having a good time yet.

The waiters were quite entertaining and kept the place going strong until it was time to head back to the ship. 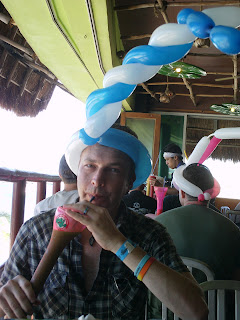 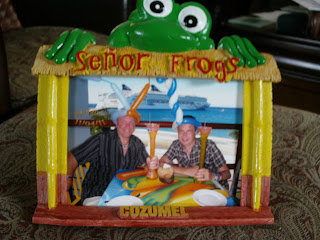 We had this picture taken of us and didn't realize until after that we were sitting with our ship right behind us. That isn't a picture on the wall. That is really our ship across the street.

At this point, we had totally forgotten about even having a home to go back to. 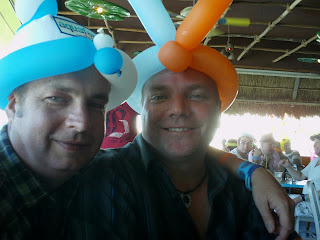 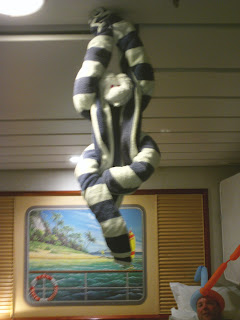 When we finally made it (somehow) back to the ship, this guy was swinging from the ceiling. (Our third towel animal) He and I spent a little while together recuperating from Cozumel. I was a little more impressed this time around.
Posted by Unknown at 6:00 AM

Oh the tequila! It must have been great stew to just mosey around the island as you pleased. Glad it was better this time.

OH!! i LoVE that iguana. too bad he no speak english so you could have found out how life treats him down there in Cozumel!!

and there are those BALLOON thingies i mentioned in another comment!! balloon hats! then a towel monkey...or is it a prisoner in stripes? whatever it is...i think the makers of those things DO go to the same school...or learn from the same book!

how cool to have your cruise ship right there in the BAR picture with you!!

If you have tequia to spare you can send it this way. I love the stuff.

I'm impressed with your menagerie here. I don't know whether I prefer the donkey, the iguana or the monkey. Cool post.