We awoke the next morning at one of the most beautiful ports, I've seen.
Roatan, Honduras.
The port itself was very small and you can clearly see the surrounding town and countryside.
As we exited the protected port area, the sales pitches began. "We'll take you here or there for cheaper", "Don't support the rich, help the real people of Honduras".
It was heartbreaking that they were out there begging the "rich Americans" for anything that they could get.
This being our third stop on this trip, we were getting used to this. 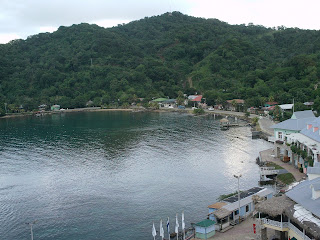 On the ride out to the resort in the taxi van, our escort was telling us about the school system. He was a high school student, working to help support his family; His mother had 13 children. The schools all share one building. The youngest children go first thing in the morning, with the middle age children right behind. The high school kids are free to work in the day and go to school in the evening.

They are a very religious island. The main religion is Penticostal with Catholic a close second. Having grown up in the Penticostal church, I know that it is filled with a lot of rules for life. And the list of dos and don'ts are mainly just don'ts. Like in Belize, the average daily wage is very low and again the lucky ones are the people that work in the tourism field. While we certainly don't see ourselves as rich, in their eyes, we have more than they will ever need.

"The real voyage of discovery consist not in seeking new landscapes, but in having new eyes." - Marcel Proust

Having traveled quite a bit in my life, I have learned though, these people don't seek to have what I have. For the most part, they don't understand why we even want all the "stuff" that we have. I have learned that I can visit these areas, compensate those that help me to obtain what I am looking for and leave the rest as I have found it. Along the way, I take it all in, with an understanding of how things are done elsewhere from my home.

And as Robert Louis Stevenson said; "There are no foreign lands. It is the traveler only who is foreign." 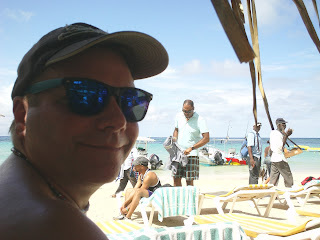 So with all that in mind, we progressed out to an amazing beach resort. When we arrived, we walked through a hotel/condo area with an amazing reflecting pool with waterfalls and bridges. We were lead out to the beach and given a private spot to unwind and enjoy the day. As we started to relax, some of the beach vendors started to approach. They were selling everything from beaded necklaces to fresh coconuts, cut open and ready to enjoy. They had sea shells and towels and anything else you could think of. We noticed that if you were nice to one, the others would follow and it started getting so we could not relax.
So we started mingling more. That's when I was finally able to get the chance to catch up with Jason and deMarco who were the headlining singers on the ship. It was their personal invitation that got me to take this trip in the first place. Being celebrities, they were constantly surrounded with groupies and it was nice to finally have a few minutes alone with them on the beach to catch up on everything that's been going on in all of our lives since we last saw each other. 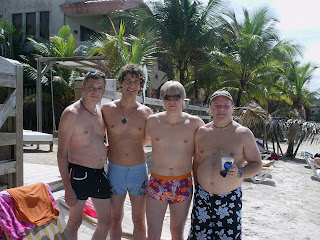 After catching up, we made our way out to enjoy some of that Caribbean Sea at our feet. The warm salt water and air are quite a contrast to here at home. 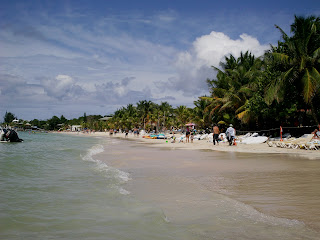 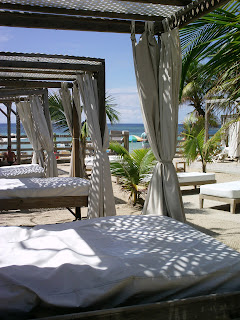 After our dip, we started looking for a quieter place to relax and chanced upon this little slice of heaven.

Then the waiter suggested that we hit the pool. Well, we didn't see a pool. So we asked where that was and we were informed that we passed it on the way in.

It turns out that the fancy reflecting pool with all the waterfalls, is the pool. 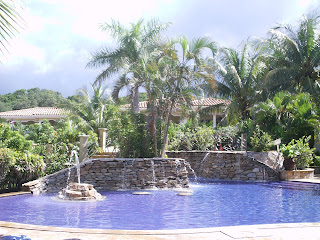 So we made our way out there. The scenery there was just as beautiful as at the beach and it was much quieter as well. 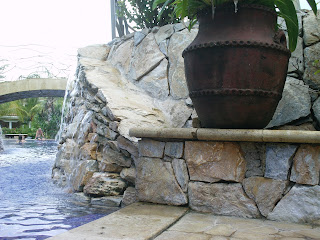 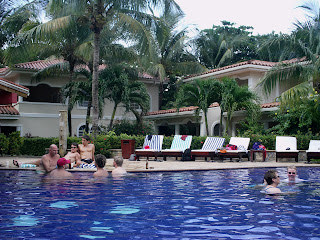 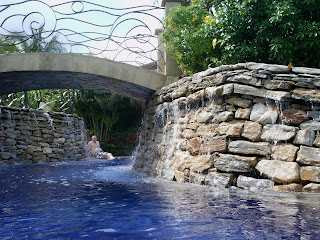 After relaxing by the pool for a while, we all noticed that our beautiful sunny day was starting to turn cloudy. The staff at the resort told us of an impending storm coming and recommended that we head back to the ship.

Feeling completely rejuvenated and refreshed, we did just that. 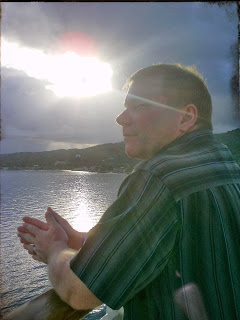 Here's Ed saying good bye to a very beautiful place in the world.
Thanks for and amazing day. 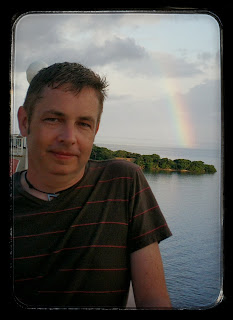 That's when we spotted this rainbow over my shoulder.

The sun setting in the West and the storm coming in from the East created a beautiful end to a great day. 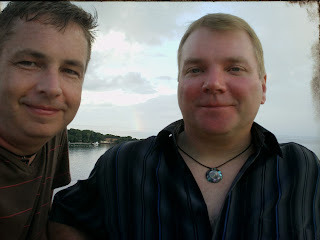 We were starting to feel completely disconnected from the stress of home at this point.


After everyone was back on board and we left the port, we could see the storm hitting the island where we were just at. I think the captain had it in Hyperdrive to get us out of there before it got rough. 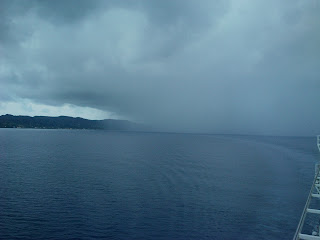 Email ThisBlogThis!Share to TwitterShare to FacebookShare to Pinterest
Labels: And I Quote..., Carribbean Trip

Looks gorgeous - just the kind of plae I could manage while the Olympics are on! :)

This does look like a little paradise! I bet you hated to have to leave!

so beautiful!!
i guess by now...you're home...
i hope the stress that you disconnected from while you were away...was able to not connect back up with you when you got home. i hope the memories of this wonderful vacation you 2 were able to take...give you a chance to stay relaxed...and breathe deep...
aaaaaaaaah. it all looks so peaceful....