We left Michigan a little after sundown.
I love to drive at night.
The miles disappear under the tires without any hassle.
We passed through Ohio, Kentucky, Tennessee and half way through Alabama before the sun came up.
We stopped for breakfast at a local diner and were welcomed by three construction guys heading off to their job site. One had shaved his head clean and the other two were sporting the best, full fledged mullets.
All business in the front and party in the back. They were rocking the plaid flannel with their company t-shirts underneath. My sister lives in Alabama and I love the people there. They are so laid-back and sweet. But when you haven't seen anyone but a couple of truck stop attendants all night, these guys were quite the welcome to that great state.
So we continued on down the road. We traveled for 19 hours straight, reaching New Orleans by 3pm. 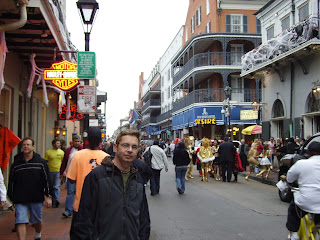 We had a little daylight left and I'm used to staying up all day after working all night, so out on the town, we went. It was chilly and damp when we first got there but soon warmed up quite nice. 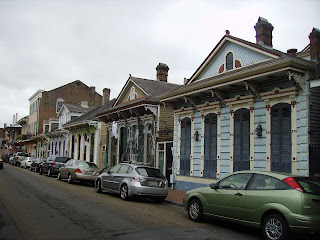 I have to say that I am in love with the architecture of the French Quarter. These houses wouldn't be much to look at if it were not for all the decorative trim. And everywhere you look there is so much charm just dripping from every detail. They even still have working gas lanterns throughout the French Quarter. 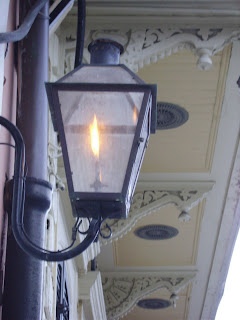 After a long night of driving and a full day of exploring, we turned in somewhat early. We knew we were missing the Friday night before Halloween but wanted to be able to take in Saturday night so we called it a day.

The next day was filled with tours and more exploring. We were fascinated by the cemetery system  and mesmerized by the architecture. We've heard so many ghost stories in our line of work that we were not all that impressed. It was more interesting to hear of the murders that are believed to have lead up to the hauntings. 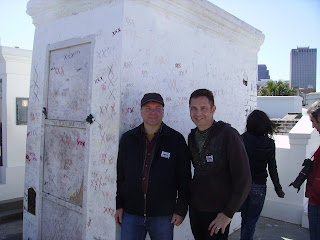 Here we are at Marie Laveau's grave. There is a lot of mystery surrounding her life and her death. And with the story of there actually being 3 of them, there is debate if this is really her grave. I would assume that all 3 would be in one grave. But then again, if they didn't want anyone to know that she had died, they may not have kept those records. My guess is that this is the last one. 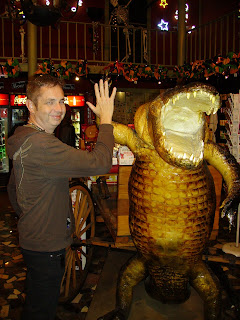 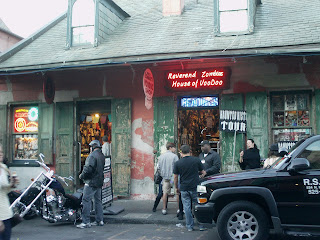 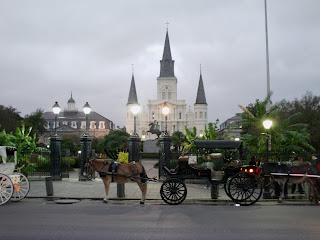 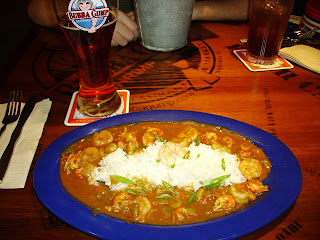 We were warned by many that you don't eat at a fast food restaurant while in New Orleans. So we sought out other options. This shrimp gumbo at Bubba Gump's Shrimp Co. was delicious.

And even though we were told not to eat at a fast food restaurant, we found everywhere we went that the food came faster than anywhere I've ever eaten. 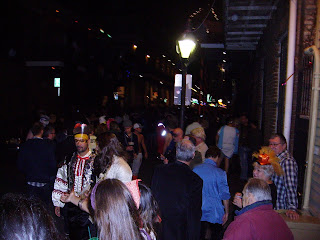 When the sun went down on Saturday night. The streets came alive. Anyone that's been to Provincetown, MA knows that there is no driving down the street once the pedestrians take over. And we're not just talking one street either. Of course Bourbon St. was the most crowded.

Being that it was Halloween weekend, most everyone was in some sort of costume. You would have thought it was Mardi Gras with all the beads being tossed from the verandas. 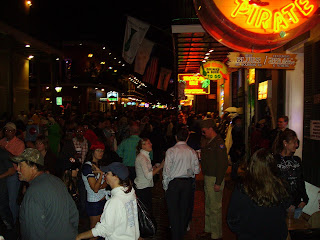 Most people have heard the saying ""Let the good times roll" when it comes to New Orleans. And people no-doubt know LasVegas's tag line "What happens in Vegas, stays in Vegas".But as our tour guide earlier in the day told us....
"What happens in New Orleans..........
Never Happened!"

So I'll have to stop there. 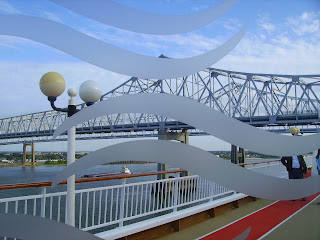 When we finally awoke Sunday morning, our ship had come in. Parked next to the famous bridge, downtown New Orleans in the Mississippi River just waiting for us.

Once we were all on board and checked in, we started our treck down the mighty Mississippi to the Gulf of Mexico. Twisting and turning the whole way. 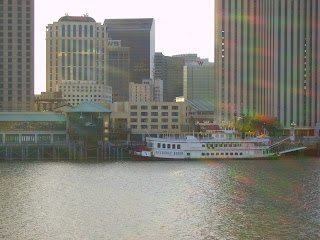 We'd wave goodbye to the city, only to see it again on the other side of the ship. 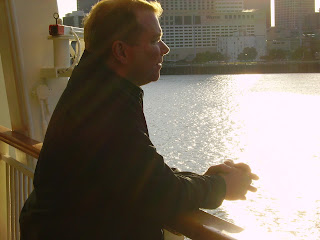 Off we went into the night. We reached the gulf around midnight and the party had already started. The video from yesterday was the first night.

Enjoying reading about your adventures, Stew, and seeing the pictures!

I'd SO love to go to New Orleans. Love your photos.

love the alligator
I want one

Of course John wants an Alligator!
I'm not a fan of New Orleans, but I am glad you had a great time!
Your bit about the murders reminded me of one of my favorite movies Midnight in the Garden of Good and Evil. Good stories!
xx

i have a friend who lives just outside the city there in new orleans. yummy cajun food...old graveyards...cool architecture...and it sure does come alive when the sun sets. watch out for the walking dead...it gets too crowded for me! but it's a nice place to visit! :)

i'm a little behind here...so i'm guessing you drove here 'cause this is where your 'trip'...the cruise...takes off from?? but in reality...you're back home now??