In reviewing our trip with friends at home, I have been asked by a few people "Why the separation?", "Why the Rainbows?" And it's not an easy answer but I'll give it my best shot. 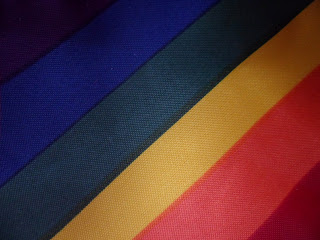 To start, it's a vacation. We are getting away from reality for a few days. In the real world, we have an older lady that has lived next door for eight years. She still thinks that we are brothers. In the real world, my husband can't even mention my name at his work because he would lose his job if anyone there knew that he is gay. In the real world, it is difficult to walk next to each other in a crowd because we can't hold hands and indicate to others that we are together. In contrast, in the separated world, it is assumed that we are with each other right away, simply because we are standing next to each other. In the separated world, people ask us "How long have you been together and where did you meet?" For one week a year, it's nice to be common.

In an earlier post, I mentioned a man that wanted to join our party and could not. I am an accepting person and I would be the first to say, "come on in!" However, the decision was not up to me. Our parties were prebooked and kept private for security reasons as well as cost. We actually paid more than other passengers so that we could attend these parties. There were straight people in our group, they just had to book with us before hand. Likewise, there were gay people on the ship that had no idea that the group would be on board and wanted to join, but could not.

The sense of belonging is something that is strong in everyone. We all want to feel like we are loved and that we belong somewhere. It hurts that in order to experience that now and then, you have to exclude someone else. In a perfect world, we would all accept each other and stop this separation. We are getting there. The fact that this cruise was possible is a huge step and I'd like to thank Norwegian Cruise Lines for that. In the past, there have been all gay cruises and to tell the truth, I don't think I'd like that at all. I enjoy meeting all types of people from all around the world. I accept them for who they are and where they are in thier life. Unfortunately, the same is not always true likewise. We still have to be careful and security guards were present at all of our events. It's a shame that we have to make laws to protect people from other peoples prejudice and force people not to pick on each other. But the fact remains that we do have to. And for one week a year, I felt safe walking next to the man that I love. To me, that was worth the extra price that we paid. 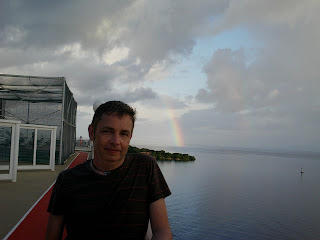 For the record, the private parties on board were the only  times that no one else was welcome. We were all free to mingle on the ship as well as on land with the locals. The other people on the ship, got what they paid for in all fairness. And I'm sure that they had a great time on their vacations, as did I.

I think it's tragic that there are still people in the world who expect you to be brothers, rather than acceptng the truth. It's downright wrong that your man would lose his job if his bosses knew.
Maybe the UK is ahead on this one. At least the law would be on your side here.

my previous partner felt he had to hide his sexuality from his work and family and it actually split us up.
The final straw came when his father was admitted to a ward near to the one I ran, and my "partner" walked past me as if I didnt exist

this week of complete relaxation is so good for you guys...so glad you were able to be "yourselves"..Jim and I feel this way in P'Town and try to go there more often than we've have done in years gone by. The security seemed excessive but I guess it's best that you are super careful...for sure. I know what you mean by "all gay cruises"..just doesn't turn our crank..but this cruise you went on sounds oddly interesting...thanks for bringing it to our attention!

it's nice to hear that you were able to get away...relax...and just BE yourselves...BUT it's a damn shame that that's how it has to be...that you have to 'get away' to 'come out'.

it's just a twisted world when a person could lose their job over their sexuality...