When we let go of the details and focus on the outcome instead, dreams really do come true.

As has been indicated in my two previous post, I've had a dream. A dream that one day, I would visit an original Frank Lloyd Wright designed and built home. To witness up close and in person the genius that was FLW.

While we were in Grand Rapids for my birthday on the walking tour that took us to many beautiful homes, we were able to see, outside and inside one of his works that was built in 1910. 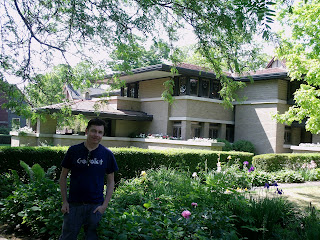 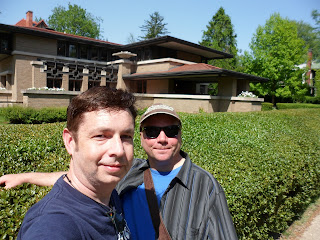 This home was designed and built by Wright for clothing store owner, Meyer May. May was a rather short man and wanted a home that would not make him look and feel so short.


Mr. Wright designed this home with a strong horizontal feel, which makes anyone look tall. Even though the ceilings are at nine feet, each room is designed with these horizontal lines that emphasises anything that is vertical. 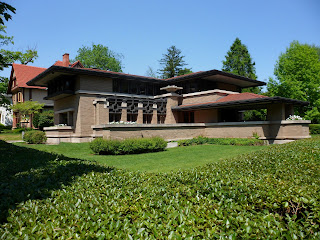 Even to stand in the garden, you will look taller. 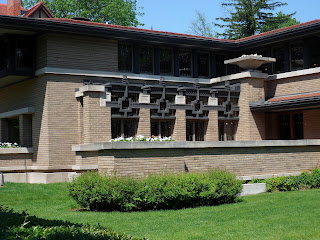 The front door is even tucked around on the side because it is too much of a vertical line for this design. 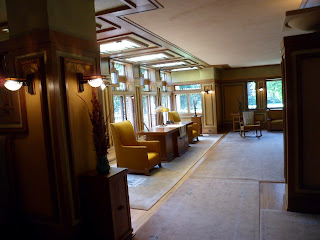 As you step inside, it is laid out with a open great room. This minimizes the vertical lines created by walls.

This was a strange concept back in 1910 when heating and cooling was a challenge in Michigan. 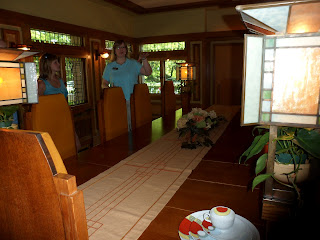 Mr. Wright designed EVERYTHING about the house, including the furniture.

In the dinning room, he designed highback chairs to create a sense of enclosure when seated at the table.

And to eliminate the vertical feeling of a chandelier, he designed lamps built into the corners of the table. 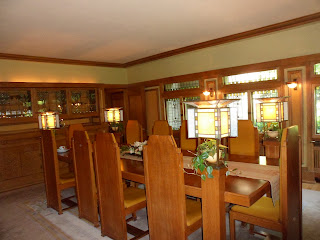 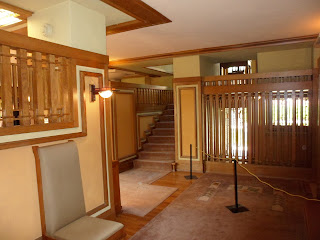 To separate rooms such as the entryway, he placed  arts and crafts style spindles instead of solid walls. This gave a sense of separation yet allowed for airflow on those hot summer days. 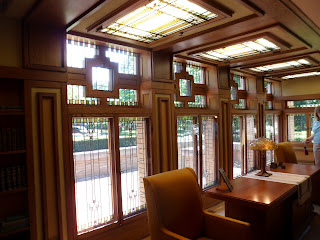 In the living room, the furniture keeps the horizontal lines going even though the windows start low and wrap up onto the ceiling as stained glass sky lights.

Even in 1910, the skylights were designed with lighting inside. This way, it was always sunny, even on cloudy days. 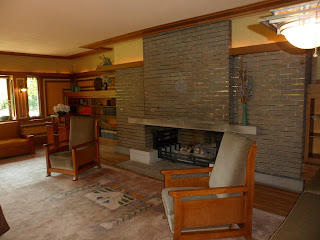 On this side of the living room, built in shelving maintains the strong horizontal lines. As does the inlaid glass tile between the bricks on the fireplace. 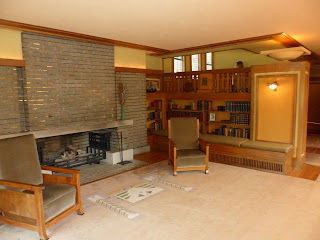 Every stick of furniture and even the rugs, all were designed by Wright. 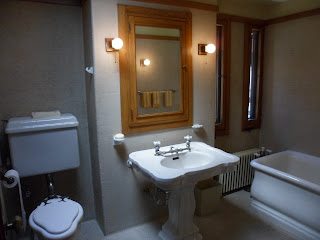 To me, the bathroom was the only place where 1910 shown through. But even here, the tub keeps that horizontal line consistent throughout the whole house. 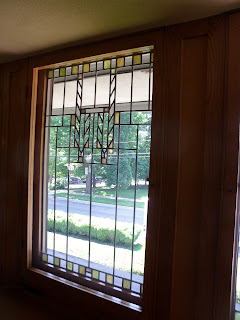 Every single window in the house looked like this.

No matter what the view outside is, how can it be bad with windows like this? 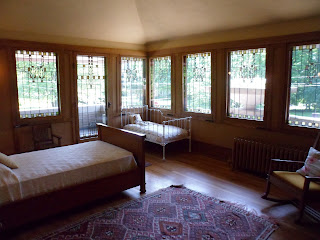 These are the children's rooms on the second floor.

Who wouldn't want to grow up here?

Where do you put all your posters and high school memorabilia though?


Throughout the house, there are pegs installed in the picture rail. Wright placed these pegs where it was appropriate to hang artwork. 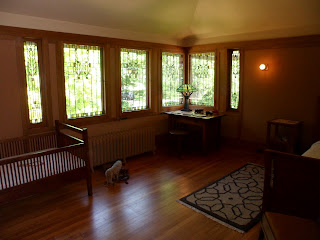 A bit of a control freak, Frank Lloyd Wright even designed the clothing that you would wear when entertaining in such a house. Because he wanted you to look your best in the setting that he'd created for you. You needed to wear just the wright colors and just the wright style. 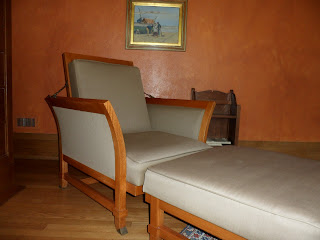 Before Lay-Z-Boy technology, Frank Lloyd Wright even designed his own version of a reclining chair. 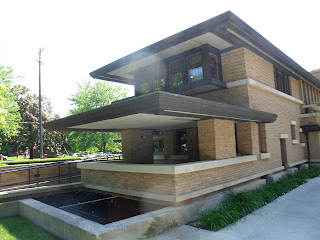 In the mid-1980's this home was purchased by Steelcase Corporation, who turned it into a museum-piece of Mr. Wright's architectural prowess.

Already well known during his lifetime, Wright was recognized in 1991 by the American Institute of Architects as the Greatest American Architect of All Time.

Wright lived from 1867 until 1959. He was an architect, interior designer, writer and educator who designed more than a thousand structures and completed more than 500 works. He believed in designing structures that were in harmony with humanity and it's environment. A philosophy he called Organic Architecture. Something that 100 years later, we are trying to understand and even mimic.

His designs were efficient in heating, cooling and overall harmony of living. He is most famous for his work completed in 1935 in Southern Pennsylvania appropriately named Fallingwater as it is built over an actual waterfall.

For me, visiting this home, was a dream come true. I am inspired now to make a trip to Southern Pennsylvania. Or perhaps Wisconsin or Arizona where his two homes and studios are located. Taliesen East and Taliesen West
Posted by Unknown at 5:30 AM

Just the kind of place I could call home.
Now, where's my manservant?!

Wright really was gifted and your post is exceptional. I had never seen anything on this particular house. Thanks for sharing this. I love that he designed everything (including furniture), although I would want to have some self-expression in my home furnishings. Having clothing dictated would be a bit much.) I worked with a woman years ago who lives in a Wright house in Del Mar, California. Amazing.

It's gorgeous! Are you familiar with the work of Charles Rennie Mackintosh? He designed a house in Northampton that we went to see last year. It's called 78 Derngate (just its address) and the Wright house reminds me of it a lot. See here: http://www.78derngate.org.uk/

Stew! Phew! I know jealousy is one of the 'deadly sins'! and I AM GUILTY of this, your honour! lol
I love Wright's work and always have. And to know that some of his 'work' is open for public viewing gets me very excited!
Great post......you could be Wright's 'right-hand man'!

I guess his designs were not very popular with the ladies because of their lack of self expression while they lived in his homes.
But really, if you own it, do as you please. Just respect the geniousness that it is.

If I had known way back when, that there is a school at Taliesen, I'd have been there before my bags could be packed.

I had heard of Mackintosh previously. I knew nothing of this house though. Very interesting what he has done with a seemingly plain townhouse.
Now I know a trip to England is on the list.

Ten points if you know what Taliensen means and where it comes from.

If you ever get to Minnesota, you should check out the gas station designed by FLK in the little town of Cloquet. (By the way, I saw the movie "Bernie" last week and it's really funny. It's the true story (Hollywood style) of a mortician's assistant in a little Texas town who befriends the nastiest widow in town. He eventually winds up shooting her in the back. It's a dark comedy and well-acted.)

Well, I've been to Minnesota, but not that far North. I'll look on line to see if there's any info on it before I drive all that way.
We've been hearing about this movie. We don't get to the movie theatre much but perhaps it will be worth the effort.

Great post. Have you been to the Alden Dow house in Midland yet? I believe he studied under Wright. I'm not sure how often they do tours of the home & studio, but it's worth the trip just to see Dow Gardens.