The burial today was about 50 miles straight north of my home. About as far as you can get into farm land  before you start getting closer to a town again. After working all night at the drug store, it made for a very long drive out to the country. This has been the third time in a week that I've been out that way with the hearse. Doesn't anyone from the city want to be buried anymore?

So as you can imagine, on the way home, I must travel through many small towns along the way. There I was coming up to the next town, when all of a sudden, I am met with a line of cars as long as I can see. At first I think that it must be another funeral procession, as we do make quite a scene as we move through town. As I got closer, I noticed that it was in fact not a funeral procession at all. It was a parade of sorts.
While on the other side of Detroit, they are having the Woodward Dream Cruise, these people are having a show of only Ford Model T's. They were everywhere as I passed through town. I had no idea that there were so many still in existence. 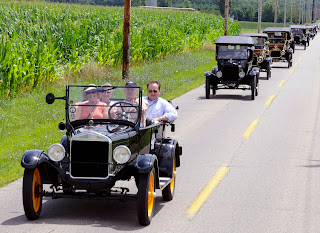 Meanwhile on the other side of the city, on the very first paved road in America, they are having a car show of a different kind. Annually auto enthusiast gather along Woodward Avenue to show off what they have. Be it a classic or a hot rod. Cars are what Detroit is all about.


But as I got closer to home, I was reminded of exactly where it is that I live. I am only 3 miles from the big Air National Guard Base, that protects Michigan from the impending invasion from Canada. Around my house, it's rare to see any kind of aircraft other than military jets. Even they seem to take off and land pretty quietly on a day-to-day basis. This makes it a fairly quiet place to live. Except this weekend.

Today is only practice. Saturday and Sunday is the actual air show. Everything from fighter jets to bi-planes. Doing maneuvers directly over my house as they turn to make another pass over the runway area where the show is put on for free. Once a year they open up the base and invite everyone to see a small peek at what's going on over there. 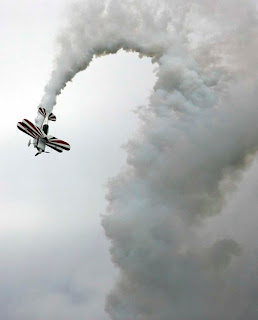 So right now, when I should be sleeping because I've been working for fourteen hours straight, I am listening to fighter jets as they skim along and trim the tops of the trees in my yard. 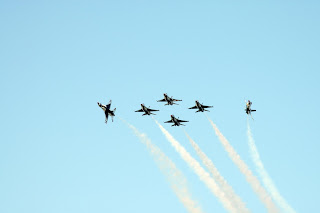 I have to admit though, it's pretty kewl to live here.
Even if I can't sleep today.

Surprisingly, the rest of the weekend was very quiet. We could see all the action of the airshow in the distance. But the noise was contained over the base.

On a sad note, one of the stuntmen lost his life on Sunday. He was attempting to go from the wing of a plane to the run of a helicopter when he missed and fell 200 feet to his death in front of all the spectators on the ground. Gladly, we could not see that from the house and the news stations have refrained from showing the entire event.

aaaaah, nothing like the sound of jet engines to lull you...to sleep...

i live outside the city...but only a couple of miles north of the airport...a couple of years ago...they hosted an air show there...we were able to watch the Blue Angels swoop & soar right over head! it was cool! at least we weren't trying to sleep...