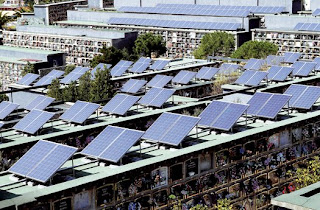 When officials in Santa Coloma deGramenet, Spain, suggested placing solar panels in the town cemetery, they were met with significant skepticism. But in 2008, after 3 years of public outreach, the city council prevailed and the town mounted 462 solar panels on top of a quarter-acre of mausoleums.

Santa Coloma is thus far the only town to use alternative power from it's cemetery to fill some of the energy needs of it's 120,000 residents; the 100 kilowatts is enough to power sixty households.

In April 2011, officials from the US Department of Veterans Affairs installed a wind turbine at the Massachusetts National Cemetery, but it will provide power only for the cemetery.

This is fascinating. There was an outcry over here when a UK town suggested installing a heat recovery unit at its crematorium. They have to use cold water to cool the unit that extracts mercury vapour (from fillings) from the flue gases and so they have an excess of hot water anyway. They wanted to run it under the local swimming pool to save on heating costs. I think it's great but it's met so much opposition.

I like the creativity of this. People have to realize that death is a part of life and there's no stigma behind it, etc. So finding ways to increase energy with something that is already existing sounds like a win-win situation to me! I for one like windmills. I think it would be nice to drive past a cemetery and seeing them going around in the wind.

hope all is well

This is a wonderful idea! They are very unobtrusive. Kudos to them!
Also, thanks for your comment. Is Ed becoming a bird nut now?
I thought of you both when I found that nest!

I love the idea of heating the pool with the hot water from the crematory. For some reason, people get all worked up over anything to do with the dead. But it's OK to have fields of rotting corpses in every town. I'm glad to see that they are going ahead with the plan.

I'm also looking forward to green burials, where there is no casket or vault used and no headstones either. Everyone is buried with a microchip and cemeteries are equipped with gps units that locate your loved ones. Of coarse the makers of the caskets, vaults and headstones don't like that idea at all. Maybe we'll try it out at the pet cemetery and see how it goes.

I have to add too that I find it strange that they refer to wind and sun as alternative sources of power.

That's what it takes!....the use of a little bit of imagination.

the dead helping the living