It's the 4th of July and here in the United States, that means that it's Independance Day. A day to celebrate and comemorate our independance from English rule. Not that I have any problem with the English or any of the countries that they govern. In fact, I make no secrect of my love for Canada or Australia. But today, we celebrate being American.
I don't know how much truth thier is to any of this, but it sounds good and I'll pass this along from my sister, who is retired from a long career in the United States Air Force, about the folding of the American Flag as it is presented to the widow or wiower of a deceased veteran. 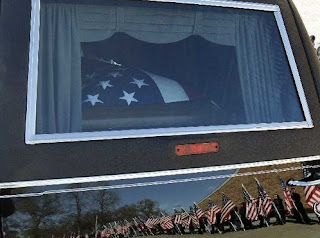 To understand what the  flag draped coffin really means ...
Here is how to understand the flag that  laid
upon it and is surrendered to so many widows and widowers.
Do you  know that at military funerals, the 21-gun salute stands for the
sum of the  numbers in the year 1776?

Have you ever noticed the honor guard pays  meticulous attention to
correctly folding the United States of America Flag  13 times? You probably
thought it was to symbolize the original 13 colonies,  but we learn something
new every day!

The 1st fold of the flag is a symbol  of life.
The 2nd fold is a symbol of the belief in eternal life.
The 3rd  fold is made in honor and remembrance of the veterans departing
the ranks who  gave a portion of their lives for the defense of the country
to attain peace  throughout the world.
The 4th fold represents the weaker nature, for as  American citizens
trusting in God, it is to Him we turn in times of peace as  well as in time
of war for His divine guidance.
The 5th fold is a tribute  to the country, for in the words of Stephen
Decatur, 'Our Country, in dealing  with other countries, may she always be
right; but it is still our country,  right or wrong.'
The 6th fold is for where people's hearts lie. It is with  their heart
that they pledge allegiance to the flag of the United States of  America, and
the Republic for which it stands, one Nation under God,  indivisible, with
Liberty and Justice for all.
The 7th fold is a tribute  to its Armed Forces, for it is through the Armed
Forces that they protect  their country and their flag against all her
enemies, whether they be found  within or without the boundaries of their
republic..
The 8th fold is a  tribute to the one who entered into the valley of the
shadow of death, that  we might see the light of day.
The 9th fold is a tribute to womanhood, and  Mothers. For it has been
through their faith, their love, loyalty and  devotion that the character of
the men and women who have made this country  great has been molded.
The 10th fold is a tribute to the father, for he, too,  has given his sons
and daughters for the defense of their country since they  were first born.
The 11th fold represents the lower portion of the seal of  King David and
King Solomon and glorifies in the Hebrews eyes, the God of  Abraham, Isaac
and Jacob.
The 12th fold represents an emblem of eternity  and glorifies, in the
Christians eyes, God the Father, the Son and Holy  Spirit.
The 13th fold, or when the flag is completely folded, the stars  are
uppermost reminding them of their Nations motto, 'In God We  Trust.'
After the flag is completely folded and tucked in, it takes on  the
appearance of a cocked hat, ever reminding us of the soldiers who  served
under General George Washington, and the Sailors and Marines who  served
under Captain John Paul Jones, who were followed by their comrades  and
shipmates in the Armed Forces of the United States, preserving for them  the
rights, privileges and freedoms they enjoy today.
There are some  traditions and ways of doing things that have deep meaning.
In the future,  you'll see flags folded and now you will know why.
Share this with the  children you love and all others who love what is
referred to, the symbol of  'Liberty and Freedom.'

I hope that everyone has a safe and happy forth of July, wherever you live. And for you English, just be glad that you got rid of us.
Posted by Unknown at 7:08 AM

I didn't know that about the flag folding and what each fold symbolized but it makes perfect sense with the order and what it represents. Sad thing is we have to fold flags to present to widows and widowers who bravely fought for our freedom; glad they were willing to die to protect the rights established so many years ago and their sacrifice to our country.


I hope you all have a great Fourth!

This was very interesting Stew! Know I know why they take their time folding the flag.....each fold has a significant meaning.
As for the English......well, that's a long story for Canadians. We are an independent country with a 'figurehead tie' only to England....it seems to work well now. Now my French background ancestors would probably disagree with me! lol

Have a great day Stew! And Happy 4th!

Interesting. Hope you're having a great day. We had burgers for dinner in commemoration.

we came to new york weeks after 9/11
the view of hundreds of flags fluttering in everyones yards....moved me to tears

It was very moving, all the flags back in 2001. And still is whenever I see things like that.

We have a millitary cemetery about an hour drive from here. Like Arlington, all the markers are in neat rows and go on and on. The drive enetering the cemetery is breathtaking. They call it the Avenue of Flags.

Hope everyone had a great weekend!

Hi, just wandered to your pages after being mentioned in a mutual blog award. I was unaware of the meaning behind the flag folding and found that interesting. As for the English governing other countries, I don't think we have done that for a very long time.
Interesting that the 21 gun salute represents the year 1776. This kind of salute was originally an old British naval tradition that dates back from a time when cannons were first mounted on ships and demonstrated that you were intent on a peacful encounter, having just emptied your guns. The navel 21 gun salute has since become a salute of honour between nations and was set at 21 guns by an international agreement between Britain and the USA in the 18th century. So it seems we are celebrating the birth of your nation whenever our military fires off a 21 gun salute. Cool!

Wow, thanks for the lesson on flag folding. That is very, very interesting!