Even in Death - Billboard

As I arrived at the cemetery today, I noticed something that I've never seen before. It appeared to be paid advertising space on the back of the headstones. 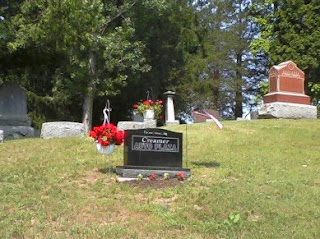 I then learned from the sexton that these two men owned competing auto dealerships in a nearby town. When the first of the two died, the family had the name of his business etched into the back of his stone. Not to be outdone, when the second one died, his family took in a picture of the dealership and had the image permanently etched in the back of his stone. These graves now sit approximately 60 feet apart and even in death, they are still competing. 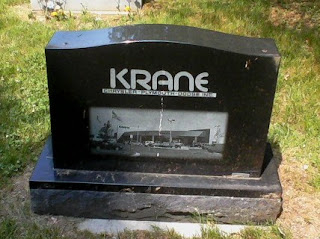 now that is the funniest (but sad) thing I have seen or heard about regarding grave markers. I have to wonder why one or the other didn't think of etching 10% off if you mention this ad at the dealership.

I hope you all have a very nice enjoyable relaxing Fourth of July!

Oh Betty, there you go giving them ideas. Now they'll have to have the engravers back out to the cemetery.

You wouldn't actually buy a car from either of them though would you? That's just very sad (and I think it would actually be against the law over here. There's all kinds of rules about what you can and can't put on headstones)

Well, I just cannot come up with any clever comment to that at all.
Just shaking my head.