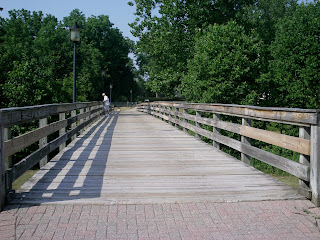 After stopping by the Old Regular Church, we decided to go out to the mill and let Pugsley cool off in the river with a quick swim. First we toured the grounds a bit and let him get some exercises. Then headed down the trail to the old damn and let him get wet. 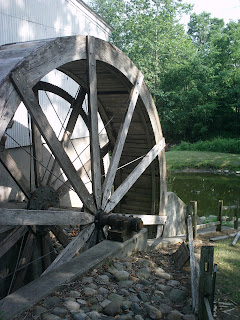 Whenever I see an old mill like this, I always wonder if my family didn't have something to do with it. You see my Great grandfather traveled the world from Halifax to remote outpost in Brazil and everywhere in between. 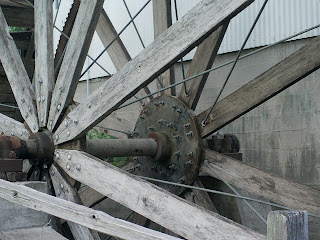 He drug his family along with him. So my grandmother grew up with a nomad kind of life. They would build damns and mills everywhere they went. After training the management and workers, they would move on to the next. Rarely was anything written down. So we don't have much as far as records go. 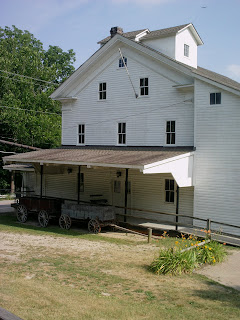 My Great grandmother did keep a journal of sorts and a book was written and published about their adventures in South America. But other than that we don't know much about all the different mills that they built. My father still has the clay water jug that his grandmother used to fetch water with while in the jungle of the Amazon. Although, I don't think it would still hold water. It is quite a beautiful piece. And very fragile I might add. After all, It's been dry for about 100 years now. 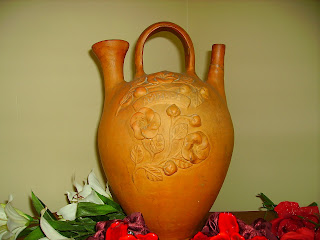 Pugsley always enjoys the chance to get his toes muddy. 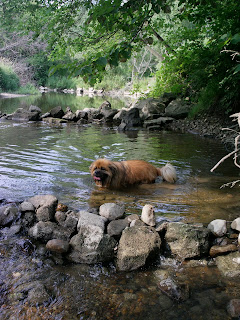 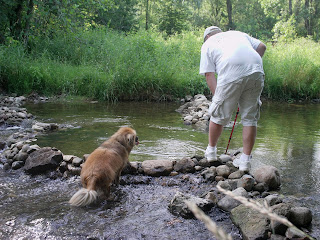 And the little fish, he finds very fascinating.

Yeah, Pugsley....now who's a lucky petunia being able to go in that river and cool of!?
Your families history sounds so exciting and exotic...I bet there are tales to be told. You mentioned Halifax as in Nova Scotia? Cool man!

That is a beautiful jug and how cool a book was written. What is the name and is it still available?
Looks like you all had a lovely day by the mill and creek!
Love that last photo!

Yes, from Halifax to Vancouver, Wisconsin, to Arkansas. And finally about 2000 miles up river in the Amazon ending in Peru.

We have a copy of the book in all my parents old stuff. I'm not sure of the name of it. But considering my Father's state right now, I'm not going digging for it. I do enjoy the stories that he has to tell of his childhood, his parents and grandparents. What a different world it was.

Dad knows that at one point they were in Western Michigan. He's not sure of the East side. Thus, I doubt that they were at this mill. But it's fun to imagine what life must have been like.

I love the jug! how cool to still have it and know that there is so much history behind it!

This old mill is so cool..I need to visit this place :)

Interesting family history Stew. Good that you have the artifacts too.

Oh my goodness that jug is priceless!!! And beautiful! The history!!!! How very cool that your Grandparents travelled and helped so many people.
Very cool!!!!

If you're interested, there is a book on Henry Ford's grand plans of building a rubber plantation and Midwest style suburb in the Amazon. I wonder if your great grandfather did some work there?

Sound like your great & grand parents had quite an adventure, Stew.

Is that nomad urge still in your family blood or have you firmly put down roots now?

Found your blog through John. My mum worked in an undertakers for decades. She could tell a story or two about that.