I just received this email from HRC and am excited to pass this along to everyone. Especially because it happened on my wedding anniversary..... 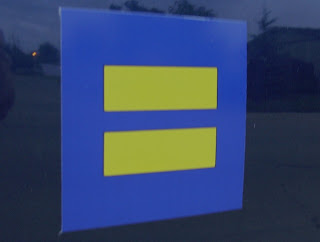 The hopes and dreams of millions just came true: Marriage equality is about to become the law of the land in New York.

Just now, in a bipartisan vote, the New York State Senate approved a bill granting same-sex couples the same rights and responsibilities of marriage as everyone else. It'll soon go to Governor Cuomo – a stalwart champion of marriage equality – for his signature.

This was no easy victory. In 2009, right-wing groups helped derail marriage equality at the last minute. And just a few weeks ago, the extremist National Organization for Marriage (NOM) committed $1.5 million to stop us from passing this law.


Soon, New Yorkers young and old will be able to marry whomever they choose. Loving, committed couples will be recognized by law. And the cause of equality will have advanced yet again, in one of our nation's largest states. New York joins just five other states and the District of Columbia in allowing same-sex couples to marry.

But this isn't just a victory for New Yorkers – it's a victory for supporters of equality nationwide. It brings us closer to the day when fair treatment is not just a hope or an aspiration, but a reality.

Stewart, you and I both know we won't win every fight along the way. But even the most heartbreaking losses are only temporary detours on the path to full equality. When we stand together, fight smart, and refuse to give up on a dream, we will get there in the end – just as we have in New York.

Thank you for all that you have done, and will do, to continue winning the civil rights battle of our generation.


One state at a time. I know that Michigan will follow, some day.

happy anniversary! wishing you both a good day and many more years of happiness

First off Stew, HAPPY ANNIVERSARY!
Next, 'WAY TO GO NEW YORK"!!!!!
6 down and just a few more to go. Pretty soon I am sure most States will realize that they are fighting a 'losing battle' and will have to concede. It's just a matter of time.

A big Happy Anniversary to you!!!

Yes, isn't that wonderful news about New York!! I was thrilled. Now that the door has opened a bit wider, more and more states will follow.

One can never give up even when the road is steep and full of obstacles.

2 steps frwd and 1 step back...that's progress in my eyes! Happy Anniversary to you both!

Happy Anniversary to you both! and

Right ON! (egads that shows my age).

I thought you'd like to know you've been presented with a blog award. You can see more here.