Now there's an oxymoron for ya. Detroit, aka The Motor City, is falling apart. There are abandoned houses, buildings and factories everywhere you look. To drive through on the freeway will turn your stomach. The people that are left are the ones that can't afford to get out. After several years of corruption, the city has been picked apart to the point that the current mayor is looking to shrink the city, just to make it more manageable with a smaller government and infrastructure.

What does Detroit have? It has a few key people that believe in it. They have invested millions to try to bring it back. But it takes more than money. It takes people caring enough to clean up their little corner without someone forcing them to. It takes people in the suburbs to attend functions in the city and supporting local businesses. 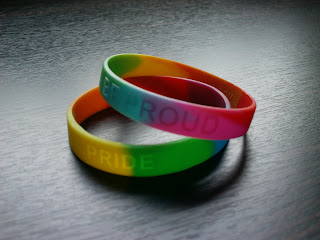 This year, Motor City Pride moved the GLBT Pride festival from the neighboring suburb where it's been for nine years to the heart of the city. Right downtown in the river front park known as Heart Plaza. It's right on the riverfront, next to the world headquarters for General Motors and the tunnel that goes under the river to the neighboring city of Windsor, Canada.
In the past, the festival was held on the main street in the small suburban community. It was nice enough and felt rather safe and homey. Having it in Heart Plaza really opened it up for meandering from stage to stage enjoying the entertainment and allowed the vendor area to be in an area of it's own.
It was nicely done and didn't seem so much like a block party.
But something was missing. There were NO RAINBOWS!. What is a pride festival with no rainbows? And while there was plenty of food vendors present, in true Detroit fashion, everything downtown was closed on the weekend. Over 25,000 people there each day for two days and there were no open restaurants, stores or bars to go to other than the three casinos that have become the only thing to do in the city. What little bit of money is left in the area, is being sucked up by the casinos. 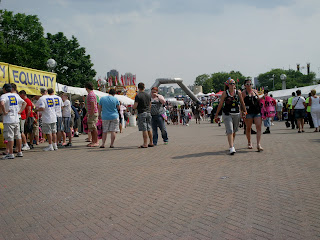 All in all, it was a good day. The move to downtown was a wise choice by the event coordinators. The weather turned out to be perfect. It was mid 80's and sunny as you can tell from the pictures. There was three stages with varying entertainment and a dance floor set up in the underground area of the park. Our area gay and lesbian center is located in the city where the event used to be. They held a smaller event out there and even ran a shuttle from one to the other. I think that the total event would have been better if they had all worked together and not try to split things up like that. But we had fun anyway.
We took with us a young man that has been hanging around our house for the last 7 or 8 months. He's never been to a pride event before and likes to think of himself as a drag queen. It was great to see him enjoying himself "amongst his people". And to witness live drag shows by big name queens (at least around here they're big names). 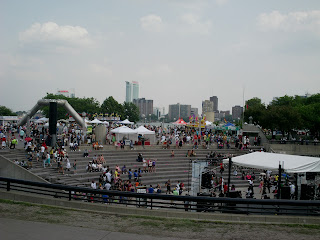 Well, that's what we did last weekend. How's your summer shaping up? Anything to be proud of ?
.
Posted by Unknown at 2:30 PM

Well, I'm glad to read that despite a few disappointments (no rainbows, no restaurants) you still managed to have fun.
My summer is shaping up about par for the course but still enjoyable...nice relaxing days under the trees with the occasional Asti (sometimes made into Mimosas) with post-bird watching Sunday brunch.
Happy Wednesday and hope your week has gone well so far.

So sad that this has happened to such a once great city. It will take time I'm sure but maybe it will be great again? Hope so.
Pride Day here is in August and it takes place in the heart of Halifax downtown. Very popular.

It was a shame that some restaurants/stores weren't open. You would think they would have taken that opportunity to make some money and perhaps let people know what they serve or what kind of stores they run. To me it sounds like it would have been a win-win situation for all! Does sound like a good way to spend a part of the weekend! I follow a blog of a guy who grew up in Detroit and lived there off and on during the years (currently in Oklahoma) but I am sure he would agree with how you described Detroit.

My summer, like my life, always catches me my surprise. Jut when I think I have it somewhat together, a curve gets thrown my way, but its all good as my now 22 y/o son says all the time.

I do have family coming in a few weeks and I may have a very special friend visit in September, that I'm looking forward to indeed!

Sorry to hear that Pride was a near-bust, Stew.
And I wish Detroit wasn't deteriorating. From what I hear it's been going on for decades.
My parents' Fords have parts sourced from the "third world". assembled in Dearborn. Yup.

Pride wasn't so much a bust. It was better than years past, for sure.

It's Detroit that is a bust. It really has a feeling when you go there that you are not welcome. Every parking lot has a barbed wire fence and a gate around it and bums follow you, begging for money, hounding you.

There are more abandoned buildings than occupied ones. And to listen to the residents, it's all the suburbs that did this to them and they don't want us there.

What they don't see is that it's the suburbanites that come down, spend money and go home. What, you don't want my money?! Then stop begging me for it!