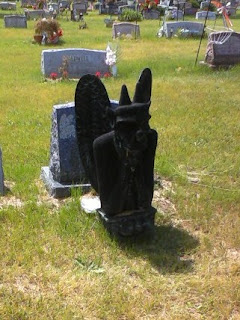 I pulled up to the grave site and as I stepped out of the long blue Cadillac hearse, I noticed this tacky plastic gargoyle that someone had planted on their loved one's grave. I couldn't help but think "How tacky!"

Then the day got even tackier.

It all started back at the funeral home where the service was held. The family had given us no indication as to who was to go first in the car line-up for the procession to the cemetery. When the first car arrived, he said that he was an uncle to the woman that died and that her two sons should go before him. It all sounded pretty straight forward and simple. Until the next three cars came in and they all claimed to be sons. None of them could grasp the idea that their cars should be facing in the same direction as the hearse. After finally getting the first two lined up properly, the third wanted to squeeze his car between the second son's car and the uncle's car. The only way he could do that was to put it in there sideways. He was already upset about a number of things so we decided that it was good enough. So that made the second line of cars not-so-straight because they had to swerve around his car. It turned out to be a small service and I didn't need the space anyway, so it really was no big deal.

When it came time to have the service, I had to go around to all the cars that people were lounging in "having a smoke" and remind them that the service was starting. One proclaimed to me that they couldn't start without him. And I told him that they just did. Forty five minutes into the service, we still had people arriving. They actually looked shocked that they were late. We even had two guys show up as we were bringing the casket out to the hearse. During the service, I don't think there was any moment that at least one of the three doors leading into the chapel wasn't open. People could not seem to sit down and listen for more than a five minute period and everyone had to get up and say something. Even those that were too upset to talk.

We finally got everyone into their cars and proceeded to the cemetery. After the committal service in the chapel at the cemetery, two more guys showed up and wanted us to open the casket for them to see her one more time. We got authorization from her daughter and opened it up, one more time. We then closed it and took it over to the grave. This is where it got interesting.

Many members of the family followed us to the grave site. As we lowered the casket, they started to sing. It was very nice and touching. The family had rented an artificial casket spray for flowers to save money. As I was taking them back to the hearse, I was mobbed by people wanting to take a flower, either for themselves or to put on her casket in the grave. I fought them off pretty good and got the flowers to safety. While I was doing that, the cemetery workers lowered the lid to the vault on top of the casket. The woman's brother then stood over the grave with an open bottle of whiskey (obviously had been sampled) and announced "One more for the road sis!" and poured about a quarter bottle on top of the vault. The woman's daughter (on the opposite side of the grave) yelled "OH NO YOU DON'T!" with a dive across her mothers open grave and sent her uncle and his whiskey flying. She then jumped down on top of her mother's vault weeping, trying to mop up the whiskey from the top of her cement vault with the fabric of her dress. We helped her back out of the hole and she sat for several more minutes with her feet dangling inside, crying. After a while she was able to stand up and finally people started to return to their cars.

This was all on a day when I had been up since the morning before, worked all night, took my dad to an appointment in the morning and then did this service, only to return to work that night. You just got to shake your head in disbelief.

oh wow! and I thought I had a dysfunctional family; got to feel sorry for them all. Honestly I do not know why people arrive late to any type of ceremony, whether it be wedding, funeral, church for that matter, plays, movies, etc. It is tacky and disrespectful in all of those situations, but I would think definitely more so for funerals as there is so much grief there and raw emotions.

sounds like grueling days for you; hope you get a chance to get some rest down the line

OMG! Okay
> People, like you said and my ex always said "Sometimes you just gotta shake your head." (southern accent)
> Thank gawd I am not the only one having a day/week!
> LOL!
> You have my complete and total empathy!

Have a nice and relaxing weekend!
meggs.

OH my sweet jaaaaayzzzuuuzzzzz. . . .this is like gramma's funeral in film Sordid Lives. Poor peeps know no better and too often every event is "all about them".
Maybe you ought to put together an HOW TO booklet to pass out to all at the very first viewing. .esp to family members. . .re: what is appropriate. . .
a plastic coffin spray of flowers??? Why bother?

For me creation, ashes in a ziplock baggy. . and then quietly to Race Point and into the sea. . .
Hallelujah!

Cremation and a final dip in the sea sounds good to me too Justin!

Makes you wonder what people are thinking sometimes, doesn't it? Why would they behave that way at a funeral?

And here I was wondering if you were out at the Jobbie Nooner gathering today :-) I praise you, Stew, for holding it together during that whole funeral fiasco!

Way too cold for a Jobby Nooner this year. For those that don't know what that is, refer to my post about "My First"
http://brightergrave.blogspot.com/2010/06/my-first.html

This woman was buried in a fancy cremation case, with rented flowers. I'm suprised they used the hearse and not just the van. You can count on the cheap ones for the most amount of entertainment, every time.
For the record, our local paper actually prints a funeral ettiquete with the obituaries. The trick is that you'd have to read it.

Um, oh my! Sounds like something one would see in a movie! I do however have to say that I found the people attending the service to be way rude. It almost seems to me that they felt inconveinanced ( spelling) at the whole affair. Wonder if they would appreciate it when their time comes and others behaved as they did.
As for the Gargoyle. Sorry but I did chuckle at it. First thought was someone has a sense of humour!