Originally published on  http://brightergrave.blogspot.com/
Well, I tried to do the 30 day blog challenge. I refuse to say that I failed. I just got a little derailed for a while. My mother has had her share of sickness over the years that I've been caring for her. But, we really didn't see this coming as fast as it did. We are certainly glad that she didn't suffer long. I have to admit that it was very strange to see such a strong willed woman just give up and quit trying. She was tired of fighting it. Once she couldn't eat anymore, it was just a matter of a few days.
I want to thank everyone for your kind words, well wishes and the prayers that you no-doubt had sent up. The out-pour of condolences was overwhelming. It was a little strange that many of them were also attached to a "Happy Birthday". I have to admit that this is going to be a birthday that I will always remember. Not only for the fact that my mother passed away the day before it. But also for the fact that by doing so, she gave me the family that I was always meant to have. Over the last week in my absence from the blog, and the weeks leading up to her death, I was able to reconnect with sisters and brothers like I never thought would be possible. And after her death, we have all pulled together to make sure that Dad is doing all right. We have all had our moments and it has been difficult. But we will be fine in the end.
Her service, as I posted here, was last Monday. Reverend Max gave a touching tribute to her. You would think that he had known her all his life. A point that Max brought up was that the game Monopoly came out the year that my mother was born (1933). A coincidence indeed that  in the photo tribute that we had playing, there was a picture of her playing Monopoly (Her favorite game). We started the service with this song and then as everyone passed by her casket to say their final goodbyes, we played one of her favorites with a modern twist.
Many people from long, long ago and far away, made their way to her service. It would seem that she was very well liked for many of years. We will miss her, but her work here was done. 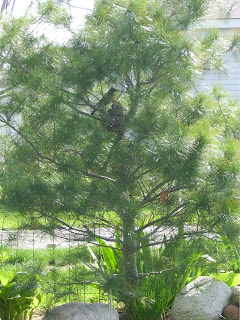 And with every death, there is a birth (or three). Last year, I wrote about the family of robins that had built the nest just outside our door. I'm happy to tell you that they have returned. The nest is built in the same place as last year and three lovely blue eggs have been deposited. Pugsley has sworn that he will stand guard and keep them safe, once again. The birds and Pugsley got along great last year. They never even minded when we would mow the grass next to the garden where the tree is located. They tend to be a little defensive with the other birds, but don't mind us at all. They are being nice to the finches though. Perhaps the little birds aren't much of a threat for them. The nest is in a small pine tree, about three feet off the ground, just above where my very first pet is now buried. His name was Dash. He was a cute little dutch dwarf rabbit that was about 6 months older than Pugsley. As Pugsley's older brother, he taught him everything that he knew...... How to chew on everything! Fortunately, Pugs listened to me when I told him not to listen to his brother. Pugs even would make sure that Dash didn't chew on things that weren't his. That brings me to Pugsley. My little buddy. He is so protective of not just myself, but any small creature that he thinks needs protecting. His fluffy coat and cute face makes everyone want to pet him. Well, that's where he draws the line..... "Don't mess up the hair!" he barks at them in a stern voice that would scare anyone with teeth glistening in the light of day. He really wouldn't hurt anyone unless they were trying to hurt something that he cared about. And that includes his favorite squeaky ball. He's the only dog that I've ever seen catch a mouse, only to have someone to play with. Unfortunately, the mouse didn't know what was going on. 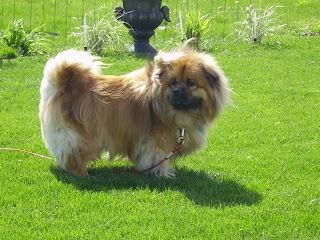 Day 27 of the 30 day blog challenge brings me to write about my pets. I know the birds are not technically mine (I'm more thier's) . These have been the pets in my life. I'm sorry that my old desk-top computer won't cough up the pictures of Dash. He was named that for two reasons. First, he was all white except for some black ears, black guyliner and five black dashes  down the center of his back. Secondly, he loved to dash around the house as fast as he could. I remember fondly the first time we let him out to run freely. He had never been out before in his life. He was so excited that he kicked with his back legs and went flying heals over head, landing on his back. He scared himself so bad that he flipped back over and ran to the corner to hide in fear. He always wanted his own space but also wanted to be near me. It was entertaining one night when he decided that he wanted to be on the bed with us. He blindly jumped as high as he could and landed squarely between my husbands legs (if you know what I mean).
Pugsley was no bigger than Dash when he came to live with us. He got his name because he had the cutest little pug nose when he was a puppy. Well, that and he is an Adams. So Pugsley Adams it is. I've told this story before but it's touching enough for a recap. Last Wednesday was Pugsley's 10th birthday. I can't believe that it's been 10 years! He is my little angel. He was not the original however. Someone had given my brother-in-law a dog to replace his recently deceased dog. For whatever reason, he didn't make a connection with the little guy. But the little fir ball started following me, jumping over the blades of grass, desperately trying to keep up with me. How could I turn him away? So I took him with me on vacation to my cabin. I instantly fell in love with him. One week later, he wasn't feeling good and I had my husband take him to the animal hospital. One microscopic surgery later and many, many dollars, he didn't make it. But it was a wonderful week that I spent with him and after much deliberation, I decided that we should contact the people that gave him to us. That's when we found out that all the puppies were sold :(  It was a couple of weeks later when I returned home from work that I heard a sound that reminded me of the puppy. My husband turned off the hose and went to the van. As he pulled Pugsley from the van, I started to cry. It was love at first sight for us both. We've been inseparable ever since......   ( ten years!)
And that is all my pets.
Posted by Unknown at 1:55 AM

Don't beat yourself up about not doing 30 consecutive days. Of all people, you've had reasons to skip a few. I glad something good has come out of the sad times and that your family are closer to you now. Take care. We're all still thinking of you.

I think the songs picked for your mom's memorial service were very nice. It is good too that you were able to reconnect with your siblings and will all do your best to watch out for your dad; I'm sure it has to be so hard for him especially to lose his spouse and his love.

I enjoyed reading about your pets. I think it is neat you will have the robin's nest and babies to keep an eye on along with Pugsley! And Dash sounds like a very cute rabbit, didn't realize they interacted that much with their family!! Pugsley of course is a dear indeed!! I'm sure he will help in the grieving process you'll be going through in the days ahead; always being by your side when he can and even giving you a laugh or two.

still in my prayers,

Stew, it was good to hear that things went smoothly at your mother's funeral. When a parent dies things change forever but they are always wit us.
I got a call from a very close friend of ours this morning....her father died a few hours earlier. They were so close and she has a lot of mixed emotions.....relieved and sad. We are off to New Brunswick later this week to attend his funeral.
The cycle of life continues as it should and you expressed this very well in today's post. Yes indeed, what would we do without our animals. You take care of yourself Stew.
Jim and Ron

It says 30 day blog challenge, not 30 consecutive days blog challenge, so no worries! At all. Wonderful to hear of the healing process for you and your family and it sounds like it was a beautiful service for your mother.

Also lovely tribute to your best buddy! Sometimes I entertain the notion of rabbits for pets.

Jack wrote: "I've heard the story of Pugsley before but it still just rips me up. Love all of you so much!"